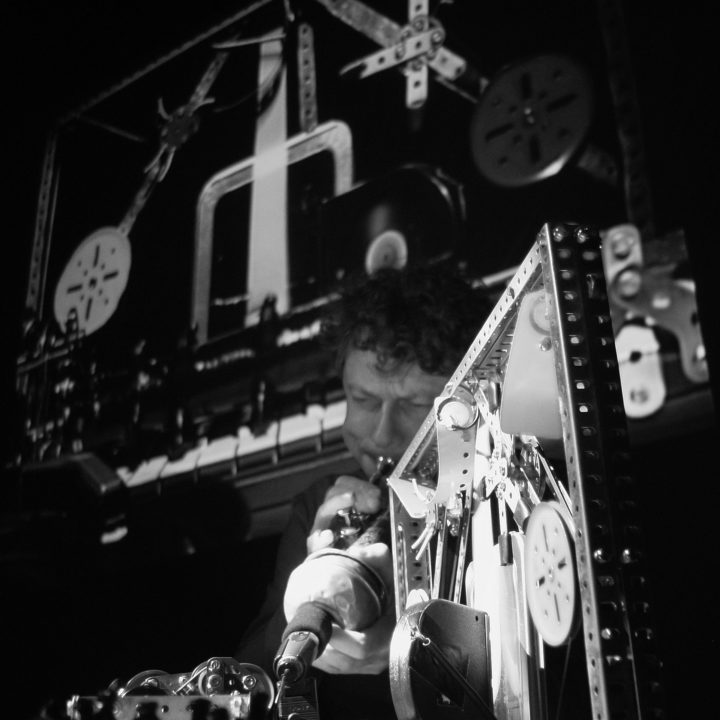 Pierre Bastien (born Paris, 1953) created – and literally built – his own orchestra called Mecanium : an ensemble of musical automatons constructed from meccano parts and activated by electro-motors, that are playing on acoustic instruments from all over the world.

“A composer’s dream : a fail-safe orchestra at one’s fingertips obeying ever so gently to his every command : a timeless sounding orchestra, both futuristic and slightly dada, conjuring ancient traditions in its surprisingly sensuous music. The musicians of his orchestra are machines. And the idea behind it is simple, efficient and poetic : to have traditional instruments (Chinese lute, Morrocan bendir, Javanese saron, koto, violin, sanza, etc.) played by a mechanical instrument made of meccano pieces and recycled turntable motors. These hybrid and self-playing sound sculptures perform a series of short pieces, charming and hypnotic.”

Pierre’s instruments are also to be seen as installations in museums all over the world, during dance and theatre productions, and last but not least, when he plays concerts. Pierre is a prolific musician and composer, releasing records (with or without his machines) on labels like Rephlex and Western Vinyl.