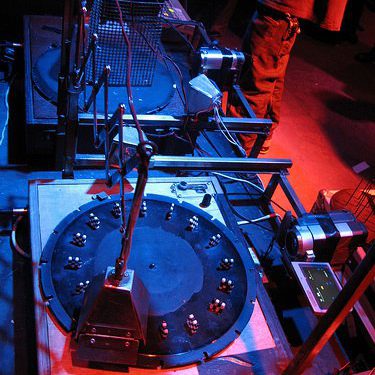 Optical Machines is a performance by Rikkert Brok(image) and Maarten Halmans(sound). They work with self-made projectors especially designed for playing loops. With these they generate interfering patterns and abstract animation. The various images and light sources are generated, manipulated and mixed live on stage. Interaction between image and sound is achieved with build in sensors. The sensors provide a signal to control several (analogue)synthesizers.

Optical Machines make a pure, authentic impression by combining their creations of sound (scapes) and visuals. Rather than (taking) a static position with flashy laptops they choose an open set-up which invites the audience to their laboratory-like playground. Their set-up contains an obscure variety of modified record players, pattern models, lamps, lenses, cameras and analogue synthesizers to make a both hypnotic and fascinating show. Optical Machines is a real live show with visuals and sound created on the spot!

Rikkert Brok
Is fascinated by light and projections. By experimenting with lamps and lenses etc. Rikkert develops projectors with an unique view on moving images. The equipment is often as important as the projected images. Therefore Rikkert chooses for an open construction so the spectator can view the origin of the images. Rikkert studied at the Interfaculty Image and Sound in Den Haag and graduated in 2002.