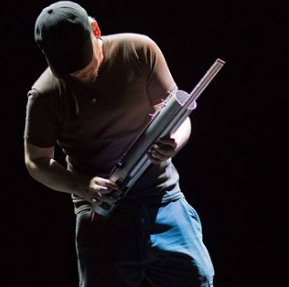 Dirk Johan Stromberg is an American music technologist, composer and improviser. His body of work explores dynamic interaction between performer, technology and performance practice. Designing both hardware and software has led to the development of network based audio cards, embedded hardware, and e-instruments. Dirk’s music has been performed in Europe, Asia and North America.

He as thrice worked on Art Creation Funds supported by the National Arts Council, Singapore – a major arts development grant. First as an instrument designer in 2010 for Joyce Koh’s “On the String” then as a collaborating composer, system designer, engineer and e-luthier for Robert Casteels’ 2014 work “2014:time:space:”, which has subsequently toured Europe and Asia as a collaborative community work. He is currently collaborating on his third Arts Creation Fund as a composer and technology integrator for a premiere exhibition in December 2017.

He has been composer in residence at STEIM (Studio for Electronic Instrumental Music) and Brooklyn Center for Computer Music and has received recognition for his work from ISAM (Institute for Study in American Music) and MATA (Music at the Anthology). He has also been artist in Residence twice at SLOSS Furnaces in Birmingham, Alabama, which culminated in the trans-disciplinary work “Convergence” in 2016.

Dirk Stromberg has been invited to present his work as a composer and technologist at a number of international conferences and festivals including, Music Tech Fest ( Umea, Sweden), Sound Islands ’15 (Singapore), and Temp’Ora (Bordeaux, France).